And another weekend is over.. time flies… really!

About 2 weeks ago version 2.49 of Blender was released. And practice makes perfect, as there were some imperfections in the release, an update was promised in 1-2 weeks. I have been checking Blender.org daily, but so far no update in sight. Now I am sorta stuck in a dilemma… as everything really itches to do some further 3D work… so do I continue in 2.48 or will I update to 2.49 and do the same thing again probably tomorrow… *sigh*…

Same goes for WordPress… I update normally within a week of a new release, first I wait to see if there are emergency reports of people finding their site no longer works and there is obviously something wrong with the release. If that does not happen, I make a copy of the site, install the new version and check if I see quirks on my setup. And then I install the real thing. That normally works out fine, but I am still waiting for that one day that I just cannot make things work again.

That is why I do not like updates. My site runs fine. I don’t use much fancy features, not sure if I need them. I do not seem to miss them now. Why would I want them? Mmhm.. maybe I am onto something there…

Of course I am acting a bit silly. As a developer I am fully aware of software features that were originally planned but did not make a freeze date for a release, and security related items need to be fixed as soon as identified. And I love to have new shiny features for free. But what about software that is not available for free? Or updates that are not offered for free? What motives are there to update or upgrade?

I am still a happy user of older versions of software, I do not run Vista (and as a matter of fact, I guess I will skip that OS totally), one of my PC’s was assembled in 2001 and I only increased storage space on it. How much more features can you add to a wordprocessing application that the average user will not ever need? And why would one change the locations of all menus so no currently experienced user feels comfortable with it? Somehow I feel I have to keep up with all the changes as I make a living as ‘ICT professional’, and somewhere in the back of my mind is an image of the ‘IT dinosaur’ at a former company, professional in the time when computers took up a ballroom, and you had to send your ‘input’ through a ‘terminal’ to a ‘calculation centre’ overseas. That expert became obsolete when the PC reached the desktop. I feel I have to keep up as it would be horrible to be obsolete so soon.

It seems that changing software / hardware / personal electronics as often as you change underwear has become fashionable. And maybe that is just it. We live in a consumer age. We are pushed to buy and consume and keep our economy going. I decided long time ago that I do not understand ‘fashion’ (but hey.. I am a geek.. a girl geek.. but still a geek). So I wear last years colors, and those of the year before that, and before that.. and gosh.. 10 years back even. I do not care if it is ‘hip’, ‘trendy’ or whatever fashionable word is used nowadays. I am not a consumer, I do not spend heaps of money on trendy things. When I finally got a mobile phone (my boss said I needed one) it was already 2001. It did exactly what I expected it to do, I could receive and make calls, had voicemail and texting. It died on me about 8 months ago. It was replaced by a handed down phone which belonged to my brother earlier. It still does all the things I require from a phone and has an mp3 player and 2 megapixels camera as added bonus. I have no idea why my brother replaced it, it seems to be working fine and I bet it will last me a few years.

I must say I really do not understand where we are heading to. We buy and replace stuff faster than ever. We throw out perfectly good stuff, and pour hard earned money into shiny gadgets, sometimes only because the gadget the neighbour has is shinier than ours. I hate spending time and money on buying stuff I do not really need. Just as much as I hate wasting time on installing stuff I do not really need. But how to determine what is needed and what if I miss out on something really neat? Bleh.. reading release notes I guess… Oh and have a look at storyofstuff.com 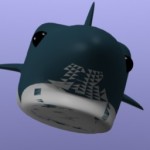 I had some serious troubles to assign 2 materials to a single mesh of a shark in Blender. Frankly, it was driving me mad… it looked like the mesh was overlapping and the resulting render looked horrible.

Careful study of the model revealed that indeed some extra faces were created when I added the fins. Also a lot of vertices were doubled, which caused problems with smoothing. I cleaned up the mesh and got rewarded with a nice render. The shark is the last model in the TUFTS course on modelling in Blender by Neal Hirsig. The shark will be animated in the very last tutorial…. after that it is time to be on my own two feet.

In my last post I wrote about the free course that TUFTS university hosts on Blender. Over the past 2 weeks I have steadily worked through all the lessons, and I feel I have basic control over the Blender interface now. It was a challenge at some points, as the course uses a slightly older version of Blender compared tomine, and Blender keeps changing and improving.

I can truely say that this course was everything I hoped for to get me started with Blender. I could have completed it quicker, but I was in no rush. I think that it is time for any 3D graphics designer to take this application very seriously, as it contains so much more features now. I have become a true fan of this software and I already made plans for items I would like to model using Blender. It will keep me busy for at least another few weeks, and if anything turns out to be good enough for sharing, I will surely share it.

I will also give Umbraco 4 a go. It is still in my plans and it would be good to get my site up and running using a full CMS. So that provides me with enough tasks at hand to prevent me turning into a couch potato. Updates follow soon…